Yeah CAC, this June is looking like another spectacular disappointment for rainfall.

Let me just give some actual stats (yes I am aware the station moved around about 1992, but just let me whinge!)

The long term average for June for Perth till 1992 was 182.4mm.
The last time Perth passed that average in any June was in 2005 (251.0mm). But of course I was overseas that year, so the last time I personally experienced an above-average Perth June was in 2002, which was still only just, 183.8mm.

I remember 2005. Had just moved to Perth. Everything was super green and lush and if I'm correct May and June were very wet but July was back to dry again.

No meaningful rain or winter temperatures for the foreseeable future. Despite the clear skies we aren't even having low overnight minimums. It's now a question of will we see any rain for the month and record a single day below the monthly average of 19.5c.

Nothing on the +384hr models, with a new blocking high developing to the south west on the 24th, and it will probably see us through to the end of the month. June 2015 was the warmest June on record at 21c, and the June of 2013 was the driest month on record at the airport, both look to be eclipsed at this stage.
Top

Wow, calm conditions over just the metro site producing a temp of 3c. I have never seen anything like this, over 7 degrees warmer just a few kilometres to the east and west! 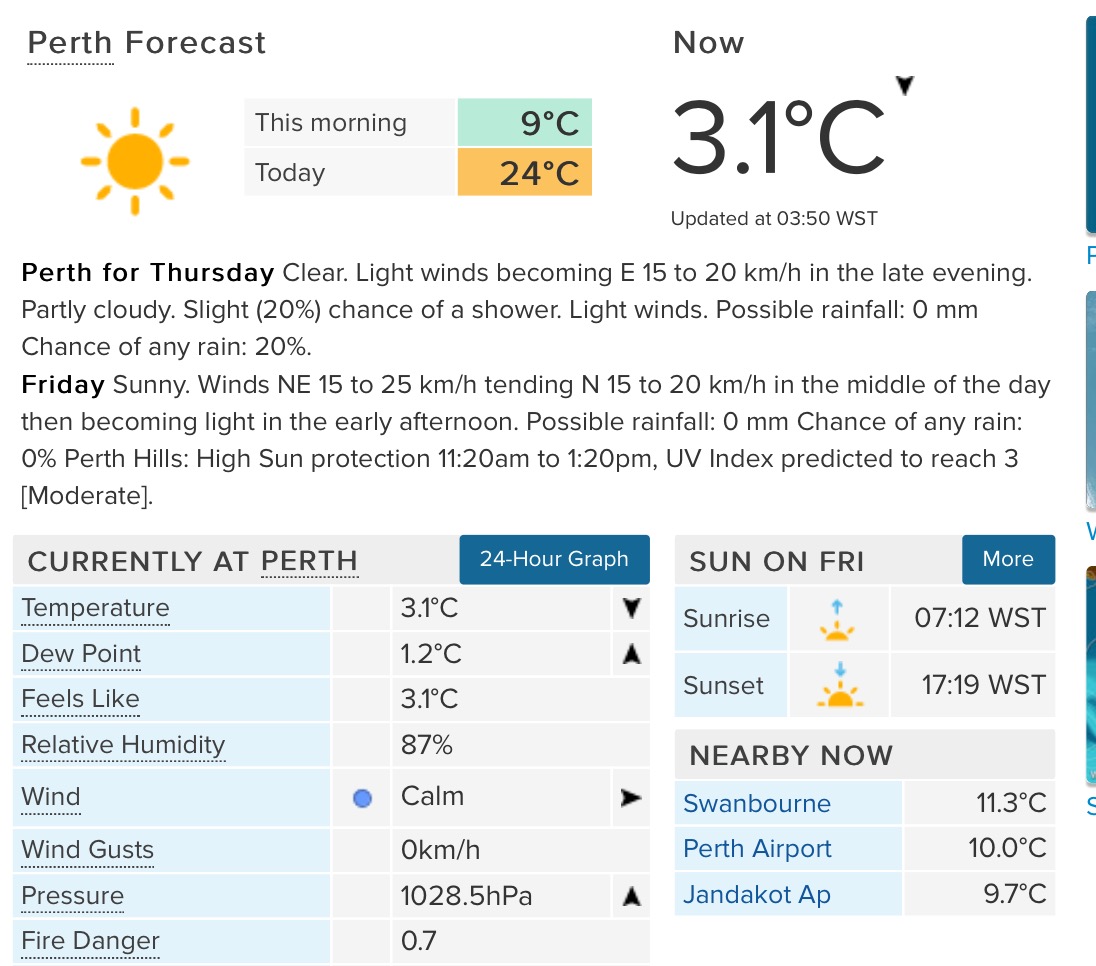 Rain for the next week by the looks. Might have finally aettled into a winter pattern
Top

1st string front of the yr & not a post. Does anyone come here anymore? Was once a fantastic forum.
Top

Social media killed the forum. Still mainly exists on Facebook and Twitter (also reason for the logo change) and going strong there. Forums are really niche and really only WZ forums have survived because they focused on a country rather than a state and had far more members. Once discussions start to die off it's hard to keep people signing up. However still get visitors here and even though signups are disabled for now (since I had really no time to address the spam account issues) the site will still be up and never know, may come back to life!

Least this month has felt like a proper Winter. Decent fronts unlike last month.

should have our monthly rainfall average hit this time next week

Reading BOMs totals we coukd get up to 120mm over the next week!
Top

Great stage of a winter pattern atm, almost text book style, fronts are peaking near us and no high pressure systems in the way that normally slides them south.

Yeah some good rain on the way this week and next.
Margaret River

Meanwhile in Central Qld , no rain since 2 days of it in mid May and before that since March 30th. Above average temps too

A few quite nasty days ahead
Top

Sunday will be the one that is suppose to be stronger.
Margaret River

On the 4 day forecast maps Sundays front seems to have
A "kick" up from the deep low could that be a cut off low? Hoping somebody could answer. If this makes any sense. Cant seem to post a pic.
Top

Hoping my flight gets in ahead of it on Sunday evening!
Top

Very suprised no severe weather warning issued yet? Im sure it will be later
Top

Users browsing this forum: No registered users and 21 guests