overcast and windy are the two words for today
The BOM has 30 / 39 km/hr at the airport
currently 18.7, overnight 16.4
just under 1mm in the gauge from the drizzle
The BOM also hasn't recorded any rain which sort of indicates that the drizzle is right on the coast
and not going inland

Pretty much the same as the last few days
overcast ( with some breaks ) and windy
currently 18.7, overnight low 16.4

well after years of meticulous research I can finally announce
It's not really overcast here in Albany at all, yes people
the truth is
the sky here really is grey / brown !!
we get blue clouds, which is why the rest of the country gets confused when they visit Albany

so I can proudly announce
The weather here in Albany is fine and sunny, not a blue cloud to be seen
strangely though - the sun can't be seen either but we're working on that still
currently 20.0, overnight low 16.4
a little breezy here ( BOM has 20 / 30 km/hr )

It's overcast here with one or two breaks
light winds from the SE
currently 20.0, overnight low 19.3
1mm in the gauge

partly cloudy, light SE wind
currently 19.3, overnight 18.5
yesterday was quite humid but it is relatively comfortable now at 70% indoors

As I lay awake early this morning I was thinking
"gee that wind has picked up ..... "
of course it has
Friday is rubbish truck day here, of course it's windy
the BOM has gusts up to 40 km/hr
I'm think along the lines of
The heated gases escaping the bins creates a column of rising air, thus creating a ground level low pressure zone,
as more bin gas escapes, the lower the pressure and consequently a breeze is generated
That's why it is always windy at your local tip !!

Currently 19.6, breezy Easterly blowing
overcast to the south, breaking up to the north

Love your updates floppy. Think this is my favourite thread here

This bit is about the only thing that changes on this thread lately - the date and time
Sunday Feb 13
6:45 am

Gawd strewth... roll on winter
Nev
you can never always sometimes tell
when you least expect the most

well someone somewhere must have done something
because for a few hours yesterday arvo the weather cleared and instead of overcast and wind, we had partly cloudy and more wind
oh well a change is as good as a rest I suppose
currently there is still a bit of low cloud around and above that bits of cirro-stratus
currently 19.6, overnight 18.1
yesterday the BOM had gusts over 50 km/hr but it has settled down a bit with 19 / 24 km/hr

here is what is happening in space at the moment from spaceweather.com

EARTH-DIRECTED SOLAR FLARE: Sunspot 1158 has just unleashed the strongest solar flare of the year, an M6.6-category blast @ 1738 UT on Feb. 13th. The eruption appears to have launched a coronal mass ejection (CME) toward Earth. It also produced a loud blast of radio emissions heard in shortwave receivers around the dayside of our planet. Amateur radio astronomer Thomas Ashcraft recorded these sounds. Stay tuned for updates!

BEHEMOTH SUNSPOT 1158: Sunspot 1158 is growing rapidly (48 hour movie) and crackling with M-class solar flares. The active region is now more than 100,000 km wide with at least a dozen Earth-sized dark cores scattered beneath its unstable magnetic canopy. Earth-directed eruptions are likely in the hours ahead.

quite a warm and sticky night last night
currently 20 9, overnight low 18.7
The overcast is back but at least the wind has dropped
it does seem to be lightening up so maybe we will see some blue

I received this e-mail

MAJOR FLARE: Earth-orbiting satellites have detected the strongest solar flare in more than four years. At 0156 UT on Feb. 15th, giant sunspot 1158 unleashed an X2-class eruption. X-flares are the strongest type of x-ray flare, and this is the first such eruption of new Solar Cycle 24. The explosion that produced the flare also sent a solar tsunami rippling through the sun's atmosphere and, more importantly, hurled a coronal mass ejection toward Earth. This raises the possibility of geomagnetic storms in the days ahead. Visit http://spaceweather.com for images and updates.

woohoo an x-class flare
if this keeps up - it has the potential to seriously bugger up satellite comms and nav, power grids etc 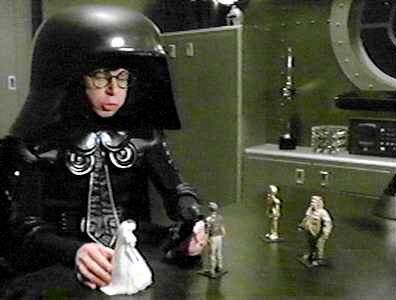 nothing is moving at ludicrous speed down here at all
forecast right thru to Saturday is drizzle
speaking of Darth Vaders. I like that ad on TV with the little kid trying the force on the car

Hopefully the radar down there doesn't get jammed

brayden wrote:Hopefully the radar down there doesn't get jammed

sigh ..... sadly it wouldn't matter much if it did
the picture is going to be pretty much the same

forecast "drizzle" .....hm didn't get much drizzle, actual weather was overcast & 3rd week of bitterly cold easteries - blew all day, no fishing for another 10 days at this rate...
i don't think i've ever experience soooooo many days of easterlies - what do u recon floppy? is this a record or not cheers FE
Top

Hi FE
Got a bit of drizzle tonite in town about 7:30
was at SES talking to some guys in the midwest on the HF radio
and yep
waaaaaaayyyy too many easterlies

Users browsing this forum: No registered users and 5 guests